In the previous entry (click here) I showed you how you could speak into the microphone (or webcam) of your desktop computer and have your spoken words translated in written words by a Google Chrome add-in utility. A handy feature but there is more.

Fewer and fewer people seem to realise that the Andoid operating system on their phone is a Google product. So let's have a look.

On your phone open the notepad App. Tap on the first line of the App and the keyboard will appear. The screen will look like this: 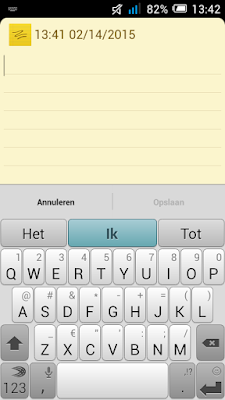 Now lets have a close look on the bottom of the keyboard. There is a small icon there and it can be accessed by pressing it a bit longer as you would normally press on the keyboard.

The keyboard dissappears and a button appears. 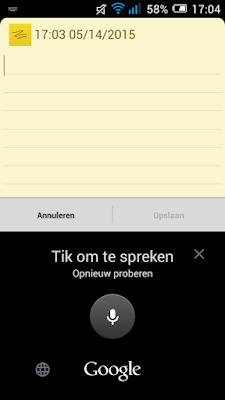 Hey I am Dutch so don't nag about the screenshots. It's the contents that counts. So lets look at this screen. Next to the Google logo there is a small globe. Clicking that will give you the opportunity to change the language.

Pressing the Microphone button starts recording your spoken word and translate it into written words just like the Google Chrome application. 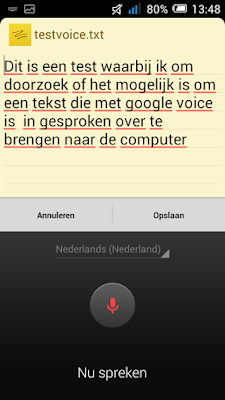 And there it is. My first test. I spoke the words and my phone translated it in written words. Neat !!!
There is just one small flaw. The APP wrote in the first and second line - om doorzoek - which should be -onderzoek-. But you can correct on the fly which I obviously did not do for reviewing purposes. Small errors are possible.

Now isn't this just great. You can speak out your thoughts or handwritten notes or whatever information you have and Android will write it out and you can process it in your favorite textprocessor at home.

Beware however that is will only work if there is a wifi or data connection present. So this will cost some money or bandwidth if you do not have the right bundle with your provider. It will also work off-line but then the margin of errors will be bigger.

But there is more to come. It will get better. Really. Believe me !!!

This was the last entry before I go on a Holliday. So till next time, have fun.
Luc
Gepost door luc op 10:00 AM

Email ThisBlogThis!Share to TwitterShare to FacebookShare to Pinterest
Labels: Android

Scavenging at the flea market

Few weeks ago it was 'Koningsdag' here in the netherlands. The real meaning of this is that it's our Kings birthday. The consequence is that it is a national day off and the complete country is turned into a big Flea market where everybody sells his or hers redundant stuf.

This is the day to score. So that is just what I did. 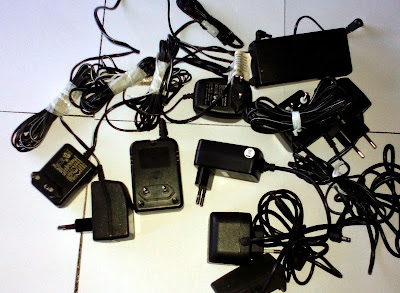 I bought in total 10 pieces of powersupplies. They vary in voltage between 5 and 12 volts and overall do not have a big output (like a few hundred miliamps) but that is more as sufficient for most projects. I am especially pleased that I found some 12 volt versions as they are capable to power some parts of the ledstrip. In total I scored 10 pieces for 5 euro. That is 50 cents pro piece. Not a bad deal.
There were many more things on sale for a few euro's like keyboards (PS2) CD and DVD writers and computer loudspeakers. Last year I scored a pair of computer speakers for just 6 euro which are now used as speakers for my media player.

Moral of this story: flea markets are a treasury for tinkerers.

Till next time.
Have fun.

APP of the Month

I just received a mail from the MIT (yes indeed THE MIT) that my Winemaker APP was chosen as APP of the month.

You can find the original link to the MIT page here:
http://appinventor.mit.edu/explore/app-month-gallery.html

Ha, and that with just a few days programming experience with APP-Inventor. Just shows how great this devellopment environment is.

Want to start programming for Android yourself. Just make a free account on the App-Inventor website and start coding.

Have fun
I sure know I am
Luc

As you will now by now I am a big fan of the Attiny85 microprocessor. It is small but has a lot off features. It works standard without an external crystal at 8Mhz. It has 5 i/o pins that can be used for digital i/o or analogue i/o and can be programmed using the Arduino IDE. So I use Attiny's a lot in my projects.

However I have frequently been bursting into a compile error. And that is annoying. Some of my projects just wouldn't compile. And I new the code was OK. I recompiled for an Atmega 328 and the Arduino IDE did not complain. However when I compiled anew for the Attiny 85 I got this: 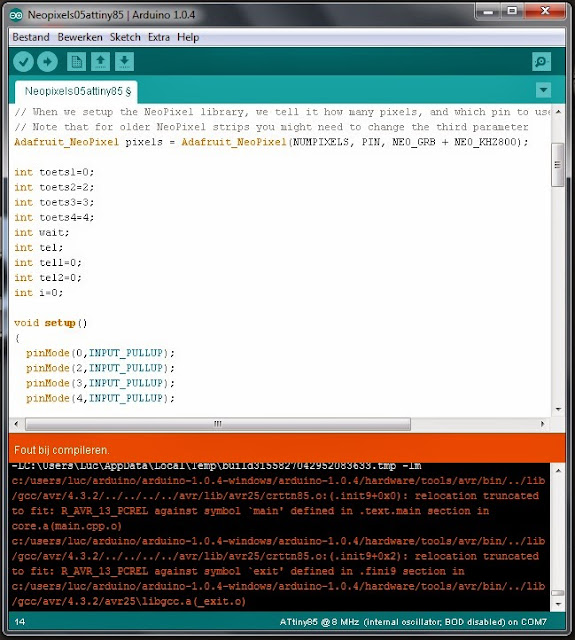 In many situations like this most of the time I let it rest and start another project. But it kept nagging me. And last weekend I revisited this project and started to get it working again. The same problem occurred. 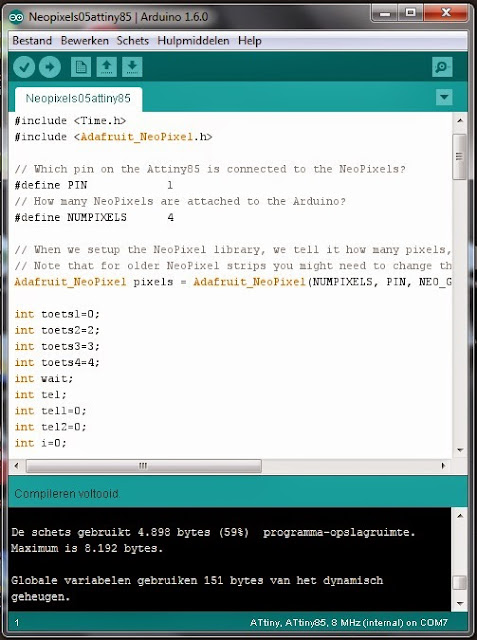 I yelled out some words my mother would not have approved off and afterwards cheered because my projects suddenly worked flawlessly.

So I wrote a mail to the MIT who developped the compiler. And within minutes I got a reply that said that they had altered the info on the webpage. And there it was:

The ATtiny’s work best with the newer, 1.6.x, versions of the Arduino software.
You can also use the older, 1.0.x, versions of the software, but there may be some bugs. (For example, there’s one that prevents the use of programs greater than 4 KB.) Download the version of the ATtiny support that corresponds to the version of the Arduino software that you’re using.

There is a bug in the older 1.0.x version of the Arduino IDE that prevents compiling beyond 4k. And they knew about it.........
What wonders me is why nobody had ever complained about it before. I know the use of the ATtiny85 is widespread,

So why didn't I upgrade before. Well most of the time I am reluctant to do that. Most updates bring a lot of overhead which is not needed and often slow your system down (we Windows users now that..........).

Email ThisBlogThis!Share to TwitterShare to FacebookShare to Pinterest
Labels: Attiny85

Ok so as I surf a lot amongst technology websites I now and then stumble on little gems. One of these gems I like to share with you.

If you use Google Chrome as your browser on a PC there is a great add-on called Online dictation. Now what does it do. Well ,exact as the name suggests. It translates spoken word into written word.

As stated before this only works in the Google Chrome browser.

First go the the webpage: dictation.io 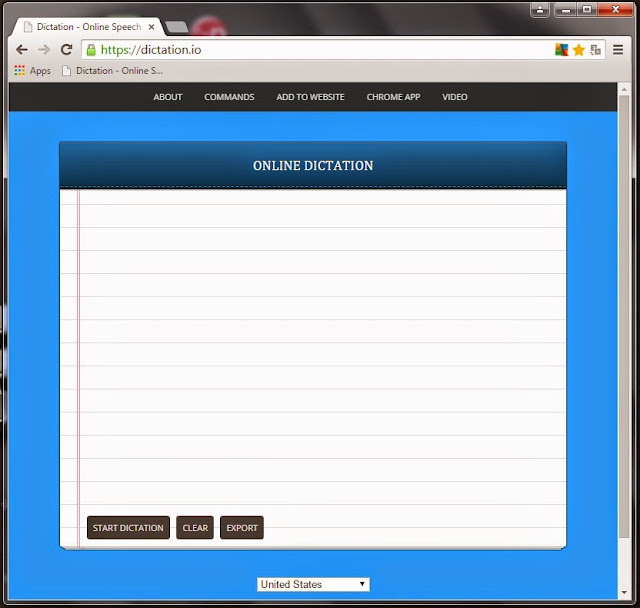 Depending on the hardware configuration of your computersystem Chrome will ask you to give permission to use the microphone on your system. I have a very old low-res web-cam with a build in microphone which is immediately recognised.

Next choose your language. 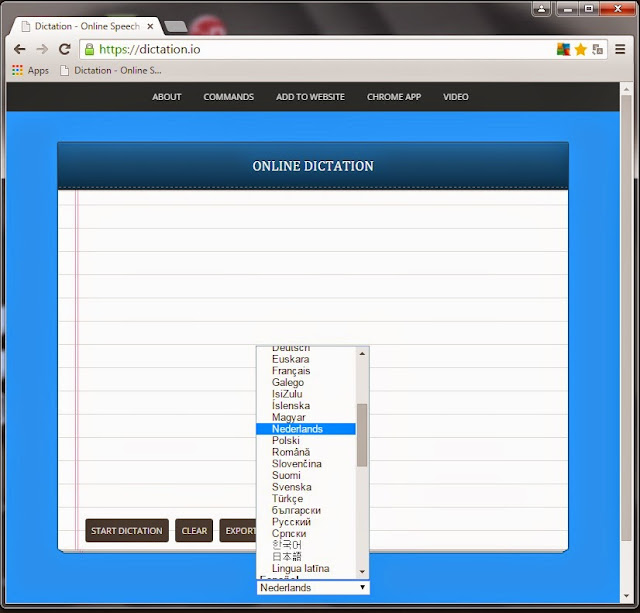 So I chose first Dutch. Just to test how it would function.

Next step is to click the button - Start Dictation - and go ahead. Slowly read out the text you want to convert articulating well and voila: 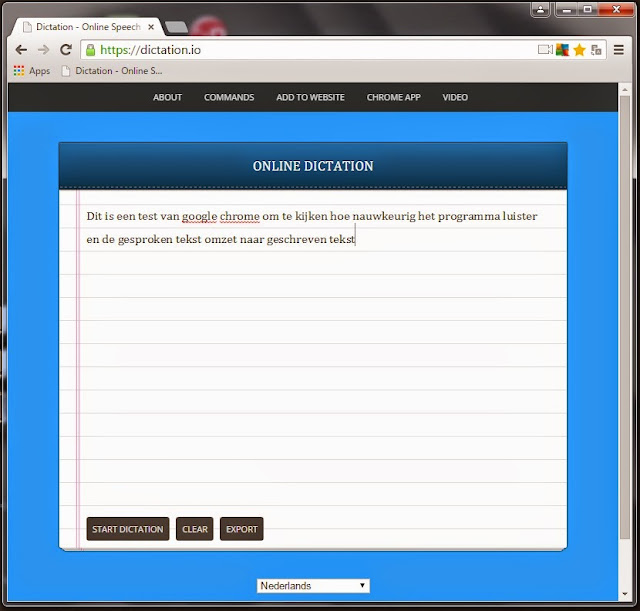 So next step was to test if my english pronounciation was ok. 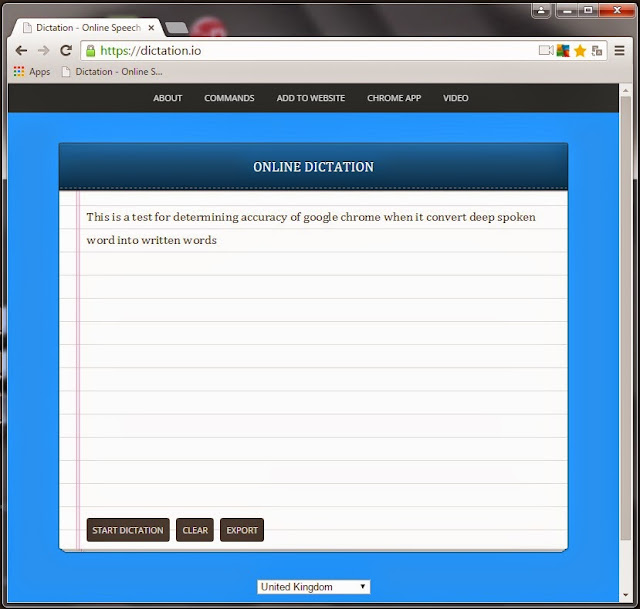 So it had some trouble there. First it did not out the s after the word convert as I pronounced carefully - converts-. And second it had a problem with the word -the- as it wrote it down as deep.

Overall I am pleased. More as it is possible to make corrections with your mouse and keyboard on the fly and you can save the written text to your PC (or to the cloud: google drive or dropbox) as a plain ascii text file. Just hit the export button at the bottom of the screen. The text file can be imported in any wordprocessor or office application.

So any real purposes ?? My girlfriend has the memoires from her grandfather. But they were written many years ago on a genuine typewriter. So we are converting it into an electronic text that can be printed and from which I can make a real bound book (hey bookbinding is a hobby of mine, there is a section on the webpages about that). That way we can distribute some real leatherbound books with the memoires of het grandfather amongst family.
But she is a lousy typist. So this helps enormous.

And there is more. Just keep following this web-log.

Till next time have fun